so lots has happened since my last LJ post...tales of the cocktail has come and gone, followed by me quitting my job and spending a few weeks making up for lost time with friends. then hurricane isaac...my first hurricane in new orleans, i evacuated to atlanta and went to dragon con. my liver has suffered. though i'm happy to say the only thing we lost in the storm was a weeks worth of power and my supply of new mexican green chile. after all that i hopped on a big boat and sailed to mexico. there was beaching, and snorkeling, and a lot of reading on the deck watching the ocean while sipping blue frozen drinks with umbrellas. oh yeah, and tequila, way too much tequila.

but i am finally back to regular employed life. working 2 jobs, bar tonique (my favorite hangout bar in the city) and a new restaurant in mid city called serendipity. i'm working with some wonderfully talented folks (including the amazing paul gustings!), and its been really great. i have a drink coming out on the new menu at tonique, named for the last month of my life. 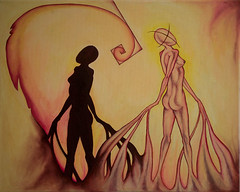 new-series
Originally uploaded by verablue
since i did the cocktail update, thought i'd also throw in an art update. one of my recent pieces that i'm particularly proud of.

time for more drink recipes...this one is not my own, it was created by paul gustings, however i was unable to find a recipe online, and thought it should be shared. i tried it for the first time at tujagues in new orleans on christmas, and it is one of the best cocktails i've been introduced to in awhile. if you're a fan of bitters (which i am), i highly recommend trying this one out!

shake and strain into stirrup cups

in 2011 i decided i was going to be happy. and well, it still had its ups and downs...but overall success. this has been a quite eventful year...i did a lot of traveling, set foot on continents i'd never been to before. did a lot of art. made a lot of new friends, and reconnected with old ones.

but the highlight of everything, i am home. for the first time in my life i've really found a place to call home. words cannot express my love for new orleans. from the second i stepped out of my car in august, despite the scorching heat and suffocating humidity, i knew it, this is where i need to be. there is something about this city, if its the place for you you know it instantly. you cant imagine living anywhere else...and if you dont get it instantly, you never will. there are no social cliques. no expectations to dress a certain way or listen to a certain kind of music...everyone is a little bit weird, and we all embrace that. i've met some really great people, that have all instantly adopted me into their groups of friends like they've known me for years.

i've been here 4 months and am already looking into buying a house. i've already saved close to $10,000 for a down payment. relatives have told me i'm crazy for buying here due to the flood risk. but if i'm not going to own a house in the city i want to call home, where then?

so here's to 2011, for bringing me home. and here's to many more years in this amazing city.

so i've decided i should start keeping a record of my drink recipes and creations. and LJ seems like as good of a place as any to do so (rather than my old method of writing things down on cocktail napkins and stuffing them in my purse).

i was asked to submit some drink recipes to the new winter menu at my bar (the sazerac bar @ the roosevelt hotel in new orleans). i came up with a few ideas, but finally just decided to submit one.

stir over ice and serve up. garnished with flamed orange zest. 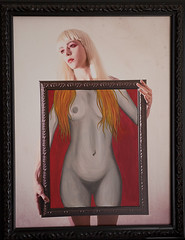 does anyone even still read this thing? well, regardless, a lot has happened since my last post. so i thought i'd post about it.

first off: i live in new orleans now. as of a couple weeks ago. i LOVE it here...it is just about the most beautiful city in the US. amazing architecture, gigantic oak trees lining the streets. we live 2 blocks from city park and bayou st. john, which is stunning. i'm also very happy to be back in a city that cares about food. i've had some amazing meals since being here. the people here are also great, i've found it really easy to make friends (which is something i usually struggle with a bit when first arriving to new cities).

on the downside, i'm currently unemployed and watching the money i've been saving for the last few years slowly trickle away. i have a few leads on the horizon though, so hopefully that will be fixed soon. there are a few bars that i would really love to work at. they are full of all sorts of fresh and weird ingredients that i cant wait to experiment with.
the other gripe is that my landlord is a crazy person. he talks to himself and seems to think that problems like the dryer not working aren't his problem because "most apartments dont even come with appliances". our hot water heater is currently not working and i'm expecting a similar response. after my lease is up i do not think i will be renewing.

i should also mention that i did end up making it to london and morocco a few months back. it was a great trip. london was rather meh...really expensive and not all that impressive. morocco was lovely however. really beautiful, great food, lots of time spent up on rooftops sipping mint tea and watching the world go by below. we took a hike through the atlas mountains, which was beautiful. also, there were monkeys! my only regret is that i wish i knew a bit more french. the language barrier was rather intense...no one speaks english.

well, i think that's about it...i'll check back in in another month or so. 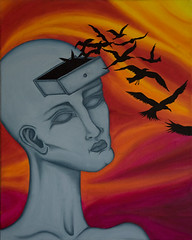 clutter
Originally uploaded by verablue
i've been forgetting to post my paintings to LJ. so here is an older one. been away from making art for awhile now (been too busy getting settled into new orleans and job hunting) 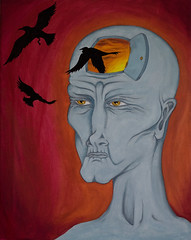 cuckoo
Originally uploaded by verablue
i've been getting really into painting. oil on canvas. 16x20

fuck your "game center". livejournal is supposed to be my escape from complicated app filled social networking sites. please do not turn into facebook or myspace. i promise to start posting more, if you promise to stick with your simple format of journal entries, and only journal entries.